John Coltrane is an american Jazzman. He’s considered as one of the best saxophonists in music history. He started with bebop and hard bop in the fourties, and later evolved toward modal and free jazz. He recorded and played with the best of the period, like Miles Davis and Thelonious Monk.

His compositions are using complex interactions and patterns of notes, that can be linked to geometry.

John Coltrane was born on September 23, the day of the automnal equinox in 1926.

An equinox is a time of the year where the earth’s equator plane crosses the plane of the center of the sun called ecliptic. Those two planes are different because of the inclination of the earth of 23.5°. 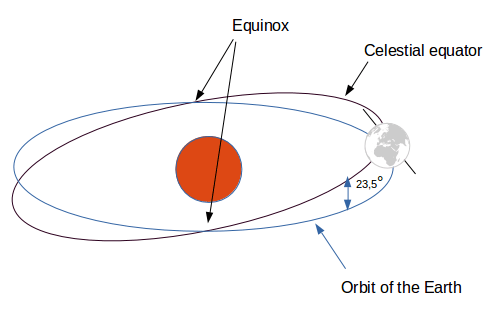 Equinox occured only twice a year, around March 20 and September 23. Half of the year, the northern hemisphere is directed toward the sun, and the other half it’s the southern hemisphere.

During an equinox, the sun is exactly at the zenith on the equator. Thus, days and nights are almost equal in time everywhere in the world. It would be exactly equal if other phenomenon didn’t get involved, like atmospheric refraction: the variation of air density in the atmosphere causes a deviation of light.